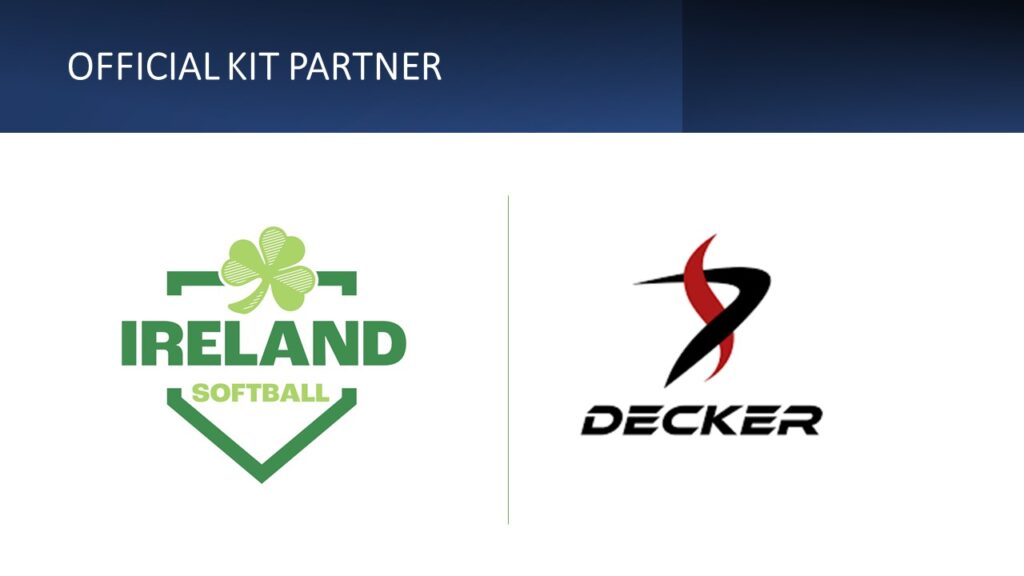 Fastpitch Ireland and Decker Sports USA (“Decker”) are proud to announce a new partnership agreement under which Decker will provide fully customised uniforms, apparel, gear and training products to all of Fastpitch Ireland national and representative teams. The partnership marks Decker’s first agreement with an international team and signifies the beginning of Decker’s global expansion.

As part of the agreement, all Fastpitch Ireland players, coaches and fans will also be provided exclusive access to Decker’s ProShop, or fanwear store, as well as the Direct to Player (“D2P”) program, which offers head-to-toe customised uniforms and apparel delivered directly to player’s doors, eliminating the need for any face-to-face interaction, and streamlining the overall uniform and apparel ordering process.

Fastpitch Ireland is excited to announce Decker Sports as our Official Kit Partner from the 2022 season onwards. Decker has a great reputation in the softball world. We look forward to being the first team to wear Decker Sports clothing and equipment in international competition. We are delighted to feature Decker Products as we travel around the world moving forward. Fastpitch Ireland and Decker will be an amazing partnership ensuring our players have the highest-level products as they represent our country!

We firmly believe this partnership will help further develop Fastpitch Ireland’s dream of growing the sport and encouraging young female adults to find a sport for life in the game of softball and feel proud to wear the green of Ireland.

Decker Sports USA, based in Omaha, NE, was founded in 1994 from a game of catch between three brothers in their parent’s backyard using a small, toy baseball.  The brothers realized it was much more difficult to catch, throw and hit a small ball as compared to a regular sized baseball.  With this concept of training, Decker Sports USA was born.  After successfully selling to Major League Baseball as well as high schools and colleges across the globe, Decker set out to create a one-of-a-kind experience for all the diamond sports athletes through customization, convenience, and value in its pursuit of inspiring the human in the athlete.